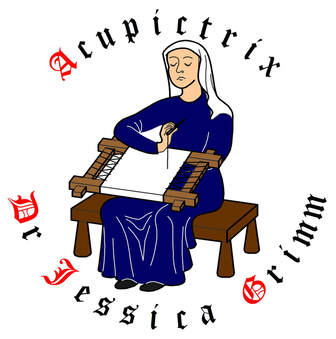 After a doctorate in archaeology at the University of Groningen in 2010, Dr Jessica Grimm decided that time had come to give her more creative side a chance. From her paternal grandmother and her maternal grandfather, who was a gifted silk shader, she inherited her love for, and skill in, hand embroidery. During her study in archaeology, she was introduced to textile conservation at the County Conservation Centre in Salisbury. She started the RSN Certificate in 2010, advancing and completing the RSN Diploma in early 2012 and became an RSN-tutor. Her vivid purple anemone won her the Hilda Watson Prize for Silk Shading in 2011.
In the same year, Jessica started teaching embroidery from her home studio in the Netherlands. She enjoys transferring RSN embroidery skills to students in an inviting and stimulating environment. Mid 2014, Jessica started teaching embroidery courses in her new studio in the Bavarian Alps, near Munich. In 2016, her embroidered interpretation of Millie Marotta's fox won her first prize in the Stitch your Heart out competition. Jessica has taught for the Royal School of Needlework, ArtTextil Dachau, the National Silk Museum Hangzhou (China) and the Crewelwork Company. In 2019, Jessica held her first solo exhibition in the Dorfmuseum Roßhaupten and her embroidered artwork 'Franzl schafft das schon!' was part of the inaugural exhibition of the Society for Embroidered Work.
Currently, Jessica is compiling a database of medieval goldwork embroidery from Europe. Her research forms the basis of the medieval goldwork course and future courses on historical embroidery. Jessica is also involved in developing a determination key for goldthreads for use with historical embroidery.